Skip to content
HomeSylvester, or the Wicked Uncle – Georgette Heyer 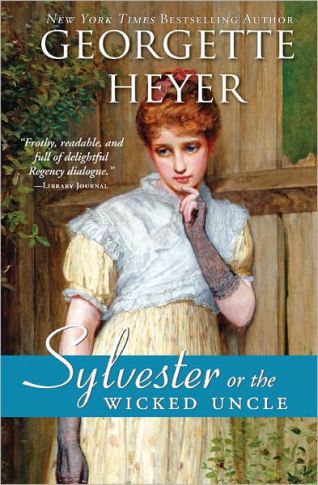 I find myself without a lot to say about this book as a whole, just some scattered points.

1. The idea that a father could leave a kid to someone other than the kid’s mom, and people are happy about this since anyway kid’s mom is not a very good parent and rather stupid, and the actually more disturbing aspect that kid’s mom cannot live with kid if she remarries, is all fascinating in a sick way (and presumably historically accurate).

2. I’ve read two reviews that doubt that the main couple, Phoebe and Sylvester, will “do anything but bicker” or that suggest their relationship probably won’t work out. I think quite the reverse- Phoebe baits Sylvester because she isn’t afraid of him. This is explicitly set up in terms of the shrinking violet she is around her abusive stepmother. She argues with Sylvester because he might actually listen- unlike her weak and uncaring father, with whom she quickly gives up the fight.

3. Sylvester’s mom is a great character and her scenes with her son enchanting. The transition from Sylvester wanting above all to find a girl who will please his mother to wondering how on earth he should know what his mom would think of his beloved is clearly saying something, but I’m not sure what. Especially since his mother finally does the wooing for him. There’s something a bit Freudian going on, highlighted by the fact that both Sylvester’s mother and Phoebe are writers (and the only people who see his big flaw). However, Phoebe is totally different in her lack of poise and her bluntness where the mother tiptoes or delicately manipulates. Finally, there’s a contrast to Phoebe’s dead mother (whom she takes after) and her abusive stepmother. All in all, I didn’t fully understand what was going on with this narrative thread and parallel, but I enjoyed it.

4. The ending reveal of why Sylvester is as reserved and cool as he is and the subtle continued grief over and repercussions from the death of Sylvester’s brother are very skilfully handled.

5. I also liked the friendship between Phoebe and Tom, and the way having a best friend of the opposite sex in a context where unmarried men and women aren’t supposed to interact unsupervised much is explored.