This sequel to The Sin-Eater’s Daughter features a new narrator in close, single-POV first, so it actually feels like book one of a series, until the new characters meet up with the old ones about two thirds of the way through. This neatly avoids a lot of middle-book-of-the-trilogy problems, or at least postpones them to the last third of the book.

Where The Sin-Eater’s Daughter took place in the gilded cage of a royal palace, The Sleeping Prince starts in a tiny, impoverished border town in the neighboring democratic country. Errin is just trying to get by and take care of her cursed and dangerous mother after her father died and her brother (Lief from book one) disappeared. When war approaches with the titular Sleeping Prince, a figure from the distant past returning to wreak havoc, Errin’s village is evacuated and soldiers arrive. Errin soon learns about the dark side of her country as refugees are abused and the border closed.

Desperate for a mysterious potion that keeps her mother’s curse at bay, Errin blackmails her only friend–and when she relents, he seemingly betrays her. Alone, Errin sets out on a cross-country journey that sees her meet up with Twylla, the previous book’s heroine, and find out about her brother’s true fate.

One thing I really liked about this book is that Errin is ordinary, heroic, and specific all at once. She’s a skilled apothecary, this interest rounding out her character and providing her a way to make a living, but she can’t create the potion that cures her mother. She survives a cross-country flight on horseback, but it’s clear to everyone she meets that she’s barely holding it together and that she’d do better to ask others for help. She’s also prone to attacks of anxiety, though somewhat too conveniently, she never freezes up when it would be inconvenient for the plot. When she does things like blackmail her friend, it’s clear she’s acting out of desperation, and she does relent. It feels like a real case of a good person brought to doing bad things, rather than an attempt to make the protagonist edgy.

I also love the darkness of Salisbury’s world. The villainous queen of book one is missing here, but there’s the chilling, sadistic Sleeping Prince instead. The epilogue, in particular, is nightmare-dark before it offers the reader some hope for the next book.

It was also great to see a realistic democratic country in a fantasy world, with all the same injustices we see in real democracies, but still better than monarchy. 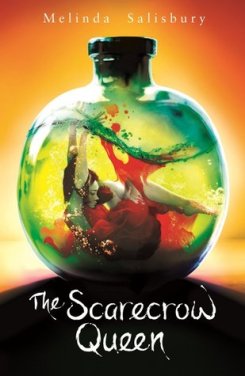 On the negative side, the Sin-Eater’s backstory as revealed in this book is too exculpatory–it makes her a bit boring compared to her earlier ambiguity. Also, a lot of information is crowded into the final third of the book, which I felt was not, until the very end, as strong as the first two thirds.

I can’t wait to see how it all ends in The Scarecrow Queen, due out next year.