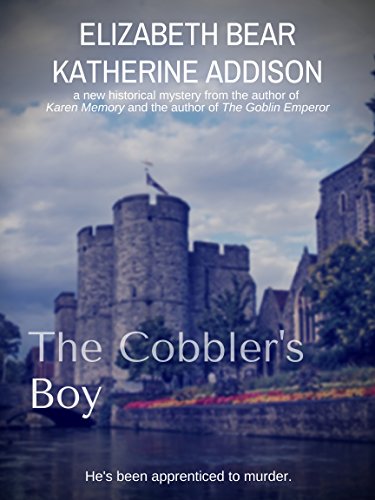 This is a really fun murder mystery/adventure set in 16th-century Canterbury as a 15 year old Christopher Marlowe, the future playwright, struggles to build a future beyond what his abusive father (the cobbler of the title) envisions for him. Oh, and someone’s just murdered the older scholar friend who gave him a window into a new world.

Enter Tom Watson (a real historical figure, though used fictitiously) who is also trying to solve the murder. Unfortunately, this puts both Kit and Watson in grave danger. Meanwhile, Kit is experiencing a secret first love with another boy and negotiating his relationships with his mother and younger sisters, all excellently characterized. Throw in a mysterious Greek book, a couple of murder attempts, and an archbishop, and you have a great mystery/coming of age tale.

This features the same historical main character as Elizabeth Bear’s Promethean Age books Ink and Steel and others, but stands alone and is straight-up historical fiction rather than historical fantasy as those are. Still, if you’d like more of Marlowe’s fictional adventures after this, check those out!

My two quibbles with this book–one, the religious conflicts that drive the murder plot could have been more fleshed out, and two, toward the end Kit does something SO STUPID-failing to ask for help from someone who’s shown himself helpful when he’s in over his head-that I almost couldn’t believe it. This is explained as a result of his father’s abuse, but I wish that decision and its motives had been more fleshed out as well…but this is an excellent read