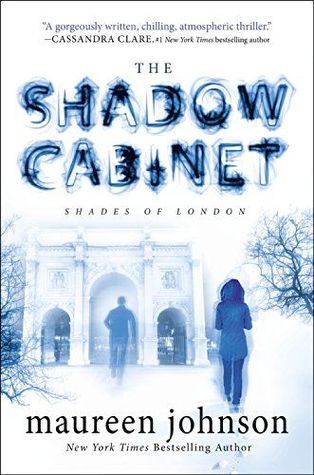 book two, and the rest setting up the finale. Nevertheless, I enjoyed it, and found it easy to follow even having skipped book two, The Madness Underneath.

Rory’s crush Stephen has been killed in a car accident while trying to save her from being kidnapped, but Rory is sure she managed to bring him back as a ghost. The problem is, she can’t find him. Meanwhile, she tries to locate Charlotte, a fellow student kidnapped by Rory’s dangerous therapist.

The best part of the story, for me, has always been Stephen, with his willingness to sacrifice himself for his fellow squad members and his goals. In this book, we get some more insight into why he’s like that, and how much it stems from his messed-up upbringing. Rory wants to punch his parents for leaving him feeling like he can sacrifice himself for everyone but no one is allowed to do the same for him (because, implicitly, he’s not worth it).

There’s also a nicely creepy scene at the beginning where Rory tangles with a manipulative ghost in a graveyard and almost ends up on fire.

I’m looking forward to the final book– the series definitely has its moments even if overall it’s more competent than amazing.

1. Karen Memory – Elizabeth Bear
This one comes out next week. The way I’ve been selling it to my friends is two words: steampunk lesbians. It’s set in the Wild West, with an Indian love interest (that’s Indian from India, not American Indian) and is in first person with a voice that’s been getting raves in early reviews. Bear’s one of my favorite authors and I’ll be picking this one up as soon as it’s out.

Book two of The Shades of London ended on a major cliffhanger– how will Johnson resolve it? Though I only skimmed The Madness Underneath, I really liked The Name of the Star and am curious to see where this series goes.

3. Black Dove, White Raven – Elizabeth Wein
I had some issues with Code Name Verity and skipped Rose Under Fire due to the implausibility of the premise, but Wein did write the absolutely lovely The Winter Prince and I love that her latest is set during the Second Italo-Ethiopian War, a lesser-known but fascinating and disturbing time period.

4. Until the Beginning – Amy Plum
In this sequel to After the End, the final book in the duology, Juno and Mike find Juno’s people, who have been kidnapped due to their discovery of a drug that prevents aging. Juno is such a great character, naive after being raised isolated in the Alaskan wilderness but fiercely competent as a result of the same circumstances.

5. The Traitor Baru Cormorant – Seth Dickinson
Disclaimer: I know the author. But you want to read this book– it’s a heartrending lesbian love story, a brutal exploration of the effects of imperialism, a great secondary-world fantasy, and much more. Much love for the cover art; the crumbling mask refers both to the Empire of Masks which conquers Baru’s home and to the question of Baru’s own identity as she navigates a sea of intrigue.