Skip to content
HomePosts tagged 'turtles all the way down'

I’m not an automatic fan of everything John Green writes- I loved Looking for Alaska but couldn’t get into An Abundance of Katherines and never read The Fault in Our Stars. However, he is immensely talented, as this book reminded me. It’s the single best portrait of OCD I’ve ever read, probably in part because he himself suffers from this illness, as I do. #ownvoices stories can be found in the most unlikely places, and a white male superstar of YA lit has written a raw, intense novel about mental illness that I hope is not dismissed by those who are sick of his fame or think he’s overrated due to his privilege. These are valid complaints, but Turtles All the Way Down does not stop being an important book because of them.

I related to so many little details, even though main character Aza has a very different form of OCD from mine. Green gets the shame, fear, evasions, and irrationality all down on paper–the fear of getting triggered in a romantic moment, the desire not to go through with effective but painful Exposure-Response Prevention therapy, the way these bad patches reccur throughout life, the self-centeredness that happens when you literally can’t get out of your own head. If I had to recommend one book to people who don’t have this illness to understand it, it would be this one.

One thing I didn’t like was that while fandom played a part in the story, it was treated satirically (Aza’s best friend is a Rey/Chewbacca shipper ffs). Satire is fine but it meshed uneasily with the otherwise realistic portrayal of Aza’s relationship with her best friend, tested by class, mental illness, self-absorption, and other barriers. I also thought that it would be interesting to read a story about a character like Aza’s friend, who is poor, dealing with mental health issues without resources, but that would be another story entirely. It’s not just middle-class people who suffer from this illness.

However, these quibbles didn’t stop me from absolutely loving the book. In addition to the OCD parts, Green captures the importance of transient relationships. Just because a romance doesn’t last doesn’t mean it doesn’t have a positive effect overall. He also discusses an interesting problem, that of virtual vs in person romance, without dismissing one or the other.

I could ramble on further but basically: Go read it. Now.

Fall is here, bringing with it Halloween, pumpkin spice, and some of this year’s most highly anticipated book releases! From the new Philip Pullman novel in the world of His Dark Materials to the 40th anniversary Star Wars anthology to the latest YA from John Green, October is going to be a busy month for publishing.

This list includes both those eagerly-awaited titles and ones that are less well known, but no less exciting!

1. A Skinful of Shadows

Having heard great things about The Lie Tree

and Fly By Night

, I’ve been keeping an eye on Hardinge’s releases, waiting for the one that will really grab me. This English Civil War fantasy, featuring a girl on the run from scheming relatives and ghostly possession across war-torn 17th century England, may just be it!

2. Turtles All the Way Down

I’ve mentioned before on this blog that I have OCD. I didn’t know that children’s books megastar John Green, author of Looking for Alaska

and The Fault in Our Stars

, suffered from the same condition. Now he’s drawing on that experience for the story of Aza, who is “living within the ever-tightening spiral of her own thoughts”–but it’s also got a reclusive billionaire and Star Wars fanfiction. 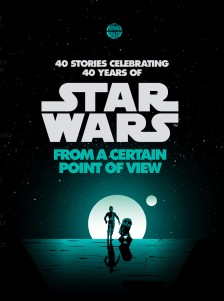 3. From a Certain Point of View

–
Elizabeth Wein and many, many others

Speaking of Star Wars fic, this collection of forty stories set during A New Hope–each from a different character’s perspective–celebrates the fortieth anniversary of the classic space adventure. I’m especially looking forward to the short story by Elizabeth Wein (of Code Name Verity

fame–I’ve reviewed her The Pearl Thief

and The Winter Prince

here and here). It looks like will be written from the perspective of one of Leia’s captors, but I don’t know anything more.

4. The Stone in the Skull

Elizabeth Bear is another favorite writer of mine, and she returns from a year-long sabbatical with The Stone in the Skull

, set in the India analogue of her Eternal Sky

from the previous Eternal Sky trilogy here). In addition to the setting and author, this book also has its characters going for it, particularly the Dead Man, a bodyguard whose charge has died. Here’s an excerpt, in which the Dead Man gives some (possibly hypocritical) advice:

, and The Amber Spyglass

. Taking place when protagonist Lyra was only a baby, this start to a new trilogy will deal with the massive flood referenced in the other books. Hopefully the time period means we’ll see more of Lyra’s parents, a magnetic and ruthless couple with a love-hate relationship.