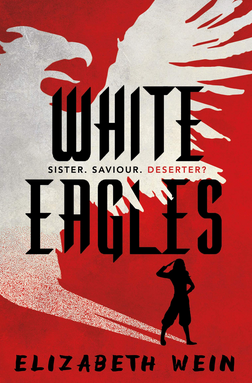 This is another short novel in the mode of Wein’s earlier Firebird, following an East European female pilot in WWII. In this case, the protagonist is a Polish girl, Kristina, who serves as a liaison pilot in the Polish Air Force and escapes in a small plane when her airstrip is taken over and her brother killed by the German army.

Except there’s a passenger she didn’t expect. Julian, an eleven-year-old Jewish orphan, has snuck onboard her plane and is determined to get to England, sometimes coming into conflict with Kristina, who wants to join the rest of the Polish Air Force in France. Julian is probably the most vivid character in the book, resilient, a bit sneaky, confident, and ultimately very, very young.

With a combination of Julian’s language skills and Kristina’s flying abilities, they cross much of Europe, encountering a variety of people along the way, from Hungarians who help them on the supposition that Julian is an Austrian Boy Scout to an Italian who tries to rape Kristina. Ultimately they make it to France, but will Julian get to England as his murdered father wanted him to?

Compared to Firebird, there was no first-person narration or clever structure, but it was a lot more plausible (no Anastasia myth here!). I liked that Kristina and Julian aren’t instant buddies, but have a hard-earned friendship across cultures and age difference after flying across Europe together. They each have to rely on the other for the skills they don’t have, which sometimes works and sometimes doesn’t.

I also liked that this book brought attention to the women who fought for Poland in WWII and the Polish war effort generally. An afterword notes the real-life contributions of Polish exiles in the war effort.

This book was printed specially for dyslexic readers, which involved changing some of the Polish spellings. Lwów becomes Lvov, Krystyna becomes Kristina. This was a little distracting (especially having Polish characters using the Russian name Lvov) but it was probably necessary for the format.